Birger TOtto Master Builder
Wannabe Engineer
Posted 4 months ago
A solution to protect the Arduino's build in voltage regulator from to much current drawn by the servos:

I cut that +5 Volt track on the PCB back (see photo arrow), so that the V pins from the digital connectors are separated from the +5 Volt of the rest of the V pins and the Arduino's 5 Volt.

You can now supply the Arduino from Battery at the Vin pins, and supply the servos over an extra voltage regulator (like an ubec) as shown on the photo too.

The capacitors were a test, to stabilize / denoising the voltagesupply for the noisesensor and the bluetooth modul - didn't help anyway..*

Addition Edit March 4th: Video and test sketch showing power supply by 4 AA Batteries to the cut off '+'-track where the servos are connected to. An extra wire connects the +6 volts to the Vin pin to supply the nano and the OLED display.

Edit March 5th: The sketch was so faulty.. but because it worked I didn't notice before upload.

Edit March 8th: A new test sketch "ServoUStest" to figure out how much servos (up to 7) can be driven at the same time. The servos are to be connected to pins 4 to 10 and a beeper should be connected to Pin 13. When powering up (and after every reset) the beeper sounds and the attached servos start moving. 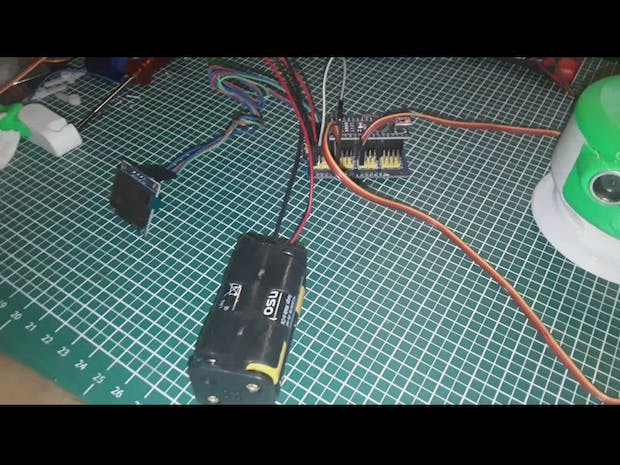 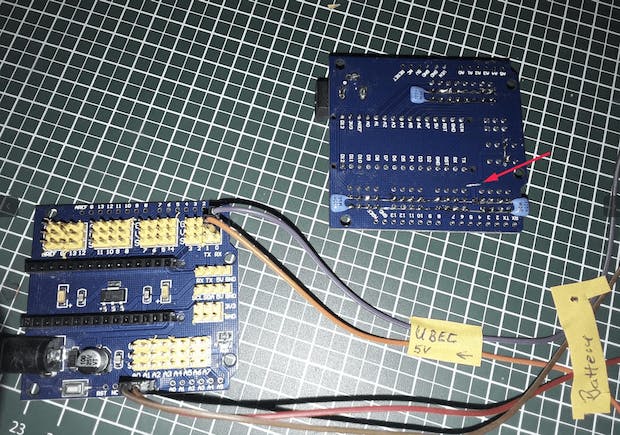