Bill SCHONFELDERMaster Builder
Senior Designer
Posted last year
This is what I have been working on the last two weeks.
I need help to make it into a balancing robot. Any one want to help?
Right now it is controlled by a radio and receiver to do my tests. It is controlled by 2 esc speed controllers on two t geared 120 rpm motors. I replaced the steppers with these. It drives good, but it drives like a tank with individual stick control.
The first picture is just a propped up version of what I am hoping it will someday be able to do. If you can help reach out to me by pm. Thanks. 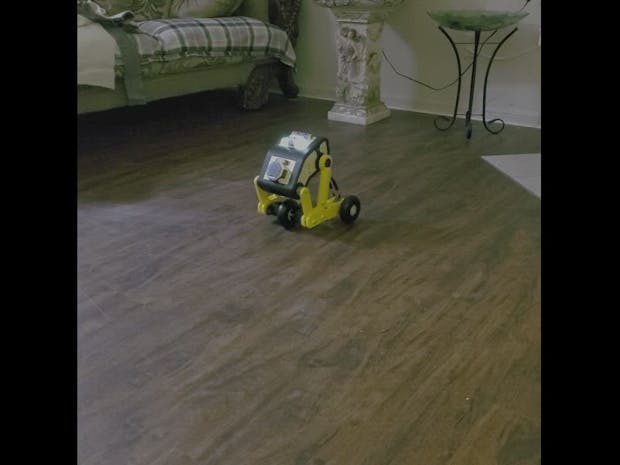 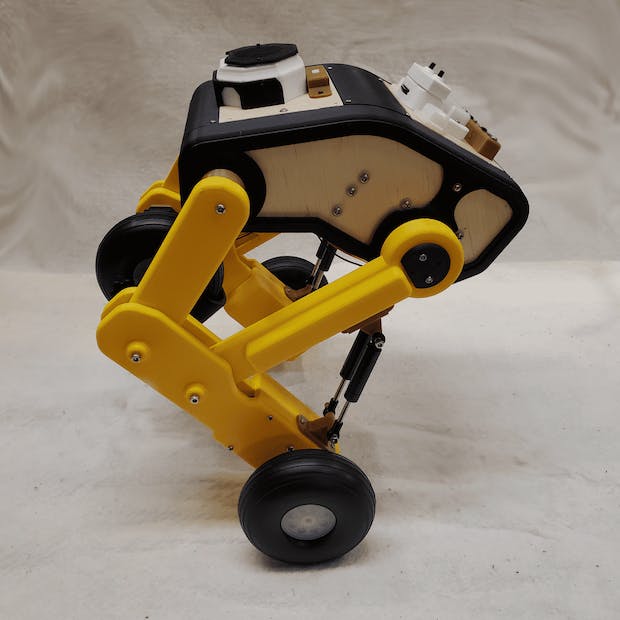 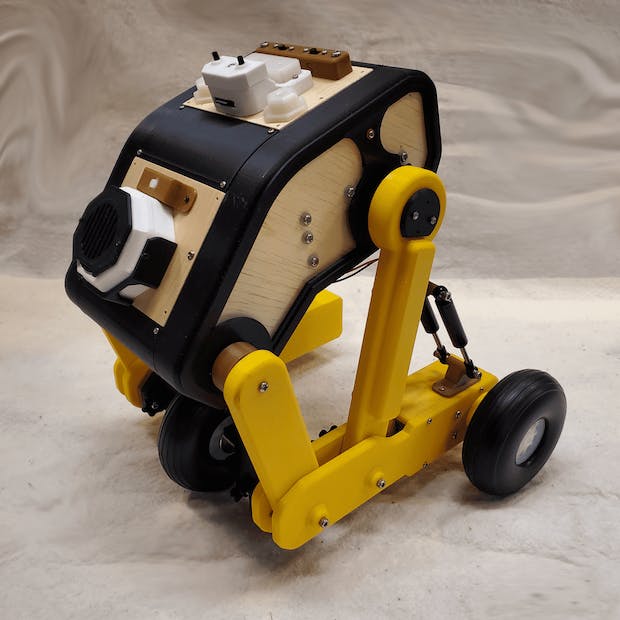 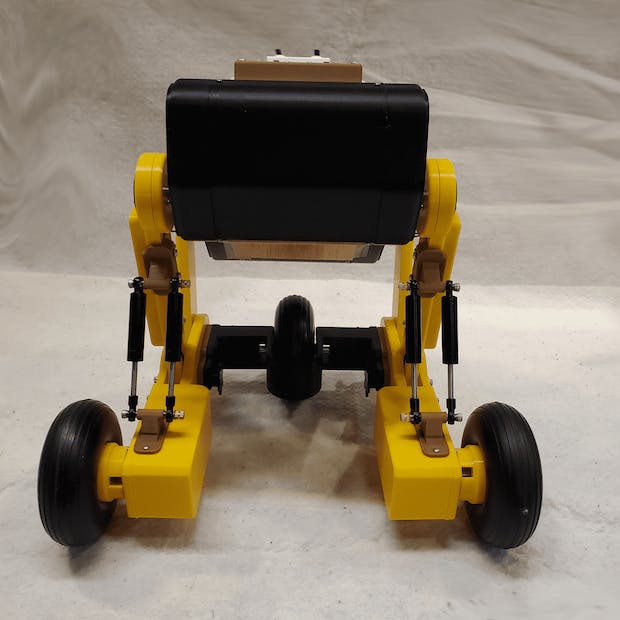 Liked by Nicolas and 2 others

Bill SCHONFELDER Master Builder
last year
All the motors that are 160 and above are 12 volt. My lipos only go to 3s 11.4 volts. Would I need a stepup converter to run 12 volts? There is no brain in it yet. If you saw ascento the video, what are they using for directional control? Adding the 3rd wheel has not been done before that I am aware of. I do have nema 17s made for it too. It's just a swap out from one leg to another. The wood can add weight too.
Plus mine is under a $100.00 and thiers is over 25k.
https://www.ascento.ethz.ch/
1

Nicolas
last year
Bill SCHONFELDER why do you compare the price when yours can't deliver a pizza ?
1

Nicolas
last year
Piers Kennedy they are using an intel i7 to run Ascento and a CAN bus to control the motors which it seems have their own MPU/MCU to control their speed and torque. It's not the same world :D They use a microcontroller too but just to read the IMU data and send it to the computer.
https://www.researchgate.net/publication/341639881_Ascento_A_Two-Wheeled_Jumping_Robot

And they have a 4 cell LiPo battery so their probably use the 12V version of the Maxon EC90 motors they talk about. They have a 2710rpm nominal speed if I believe the catalog :D
0

Camilo Parra Palacio Otto Creator
last year
Cool but to get there I think you should try first a simple balancing robot with more predictable weight balance.and centerof mass, like the one I recommended before, smaller with less torque required , I easily imagine Otto face in the one in this link 😄 https://www.instructables.com/Arduino-Self-Balancing-Robot-1/?amp_page=true
0

Bill SCHONFELDER Master Builder
last year
Nicolas A $12.00 deluxe supreme with the works being delivered on a robot that cost thousands. Why didn't I think of that. #dominoedrones
0

Bill SCHONFELDER Master Builder
last year
Nicolas Also if you look at the mix of the team. One seasoned professor, and 9 bachelor degreed engineers and you come up with?? Plus a school budget, education and donations, and you come up with. Something this ole boy will never see in his life time. I liked the way the robot would lower and raise on just one set of arms. I thought that part was pretty keen coming from a designers viewpoint. To be quite honest there isn't any room to add everything it would need to balance.
1

Bill SCHONFELDER Master Builder
last year
Piers Kennedy The best thing I could get from this $100.00 robot is chance to prove the 3rd wheel as a concept for an possible provisional patent. That third wheel came up out of the need for a radio controlled robot. Which is what Bongo really is. The 9 volt battery "fun stuff" was to see what I could stuff in there. If I can wire up a nano I would add an oled and some neos. But I am tight on room and I would have to remove the standard servo that drives the metal shaft geared lever arm. I may end up doing this still. I did discover a really cool wheel system that Otto wheels would love. I can post those files if you want. It uses a 3mm to coupler with a printed wheel and fits the N20 motors like a dream.
1

Bill SCHONFELDER Master Builder
last year
Camilo Parra Palacio Yes, Yes Yes I know, mater Otto. I like challenges as you know me. This was a challenge, and I think it came out pretty well. Least it is better than a toy print. I can add Bongo to my collection now and make it 32 robots since we met. I may still end up building a balancing otto to stay in the group theme. Just depends on what blockly will offer.
1

Bill SCHONFELDER Master Builder
last year
So if we made a list of potential robots, We would have the following Course some have been made, and some need to be made.
1 Otto Omni
2 Otto Pod
3 Otto Totter (balancing)
4 Otto gamepad
5 Otto display (tft)
6 Otto dualcore (2 nanos)
7 Otto Esper
8 Otto pi
9 Otto wheels
10 Otto terminator
11 Otto speaks
12 disco (lip sync)
13 Otto (f**t
14 Otto Quad
2

Bill SCHONFELDER Master Builder
last year
Camilo Parra Palacio how does one drive it forward or backwards? Or is that basically all you can get with an Arduino robot. Can you mix radio control in there to drive it forward and backwards?
0

Bill SCHONFELDER Master Builder
last year
Ps it is a rain day today and I will be more than likely on the computer between doing my household chores.
0

Bill SCHONFELDER Master Builder
last year
Ok back to my Dozer question (professors)
Is this possible in Blockly? If so I want to make it.
https://www.youtube.com/watch?v=j16lRMmviTI

Might make it out of wood and plastic. I have most of it already here. Except the controller.
0

Bill SCHONFELDER Master Builder
last year
@team. If we did make this robot could it change its height? Meaning lowering and raising it and still keep its cog and balancing ability? Does changing the z axis not affect the y and z?
0

Bill SCHONFELDER Master Builder
last year
If so I can make it raise and lower using linkages and one standard servo. Long as it won't affect its pids.
0

Bill SCHONFELDER Master Builder
last year
Piers Kennedy I have most of everything that the yabr robot needs. I might make it to teach myself some thing. But it must be able to lower and raise and balance. I will weight Bongo today. Thanks.
0

Camilo Parra Palacio Otto Creator
last year
Bill SCHONFELDER you should really post all your robots one by one as a project.

I am pretty sure I am the only one that knows all your awesome robots you need to get more exposure do you wanna be in the next article? Give me some compelling story, great photos and we put it together in Otto blog.
3

Bill SCHONFELDER Master Builder
last year
Piers Kennedy I weighed Bongo he is 1k 800 grams. About 3 1/2 lbs. I have some time today, (chores are done), to figure out how to add a brain inside of Bongo. I also bought some rc dc brushed motors that are used in rc trucks. Speed won't be an issue. Like everything I do I made these so they are interchangeable with the other parts that are on the robot now. Camilo Parra Palacio anxiously awaiting the new release of blockly. I am not going to make him balance at this point and time. I want Bongo to work with a small brain and have programmed voices with an oled.

Camilo Parra Palacio Nicolas will blockly be able to do mutiple oleds? I will take a look at all the posts that I missed over the last couple of days. Been busy catching up on chores and household maintenance.
1

Bill SCHONFELDER Master Builder
last year
So the multi plex is not programmable in blockly?? Which is no big deal really.

My baby elephant does have a print for the nema17 28mm motors. But I went to a gearbox when I wanted it to be remote controlled. So Bongo has feet for nemas, gearbox and soon a canned motor. It was even too heavy for the standard servo to lift up. Once I get a "happy" drive system in place, I will be adding in neos, an oled, and program the df mini. If we get the remote controller with wemos figured out I can add that.
As to pla, 2 rolls. Some cosplay outfits use more than that.
I'm just happy that the 3rd wheel works as well as it does when it comes to turning.
1

Found this today. I think it's a year or so ago
2

Camilo Parra Palacio Otto Creator
last year
Bill SCHONFELDER Piers Kennedy let me know if you have more cool videos missing in the Otto DIY Youtube channel and i will be adding them, i am also creating some cool thumbnails for them
1

Bill SCHONFELDER Master Builder
last year
I will dig through my chest of memoirs and see what I can find. As to doing the examples I want to wait for the new blockly then clean up anything I made with fresh frtizings and fresh programs. I have organized my desktop to neatly store what I have and will share it with you the community soon. As to the blog, I have to get permission from my wife before I take that on. It will be very time consuming and she needs to be on the same page if I do it. Would almost be as time consuming as editing a book. Imho (thanks Nicolas )
1

Camilo Parra Palacio Otto Creator
last year
Bill SCHONFELDER but actually we want the examples to be part of the new blockly :D so that they are already in the installation
0

Bill SCHONFELDER Master Builder
last year
As to the gamepad. I say green light. But esp is beyond my understanding. But as long as there is a very good detailed video, I can follow along with and learn from I can do that.

Nicolas
last year
Bill SCHONFELDER there is no technical reason we can't have multiple OLEDs, and even with only one OLED managed on the "software" side of things you can separately chose OLED (either with its CS pin for SPI version, or with I2C switch) to decide to which physical OLED the data will be sent to.

With nano/nano every you would quickly run out of memory anyway, one 128x64 OLED uses 1Kb of RAM for the buffer, you can't have more than one on a nano.

[Edit] I see how the TCA9548 works, controlled by I2C and not by pins, so it would need its own block on. I will order one (as well as 2-3 OLEDs) to test and add a block in the future.

Nicolas
last year
Piers Kennedy don't hesitate if you have questions about ESP32, I'll do my best to help.
0

Camilo Parra Palacio Otto Creator
11 months ago
I saw this in the maker faire https://prague.makerfaire.com/maker/entry/1149/
It is very big but quite cool robot
1